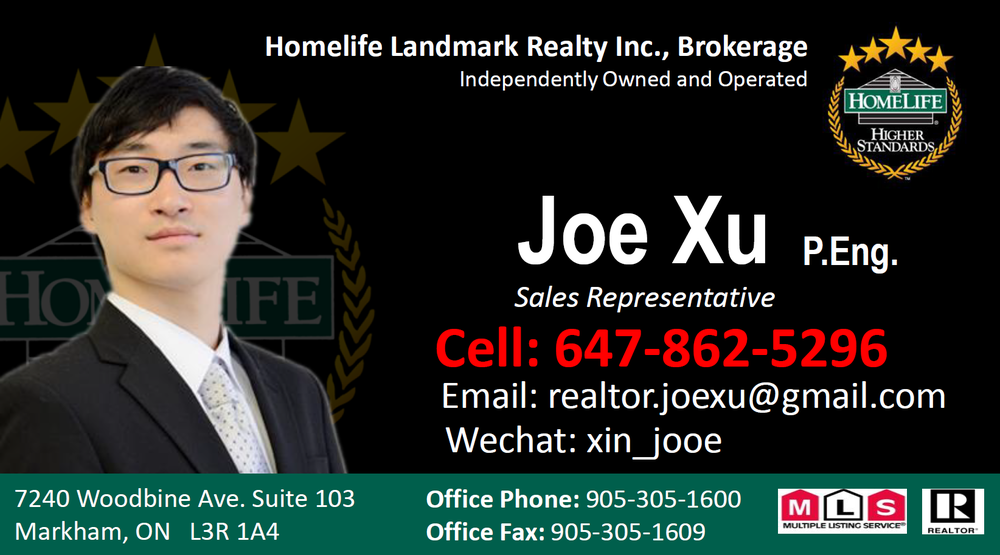 Based on the Toronto Real Estate Board (TREB) data, in the month of December 2019, there were 12 detached properties sold in the Scarborough E05 district (bounded by Steeles Ave to the north, Highway 401 to the south, Victoria Park Ave to the west and Kennedy Rd to the east). The number of detached property transaction was slightly lower compare to previous months, it was likely due to the seasonal effect as well as limited new inventory coming on the market. The average sold price for Scarborough E05 detached home in December 2019 was $976,667. Overall, when looking at the long term price trend, the average sold price showed a stable trend since June 2017 with seasonal adjustments (Figure 1). Table 1 provide additional details for detached properties sold in the E05 neighbourhood between December 1, 2019 and December 31, 2019. 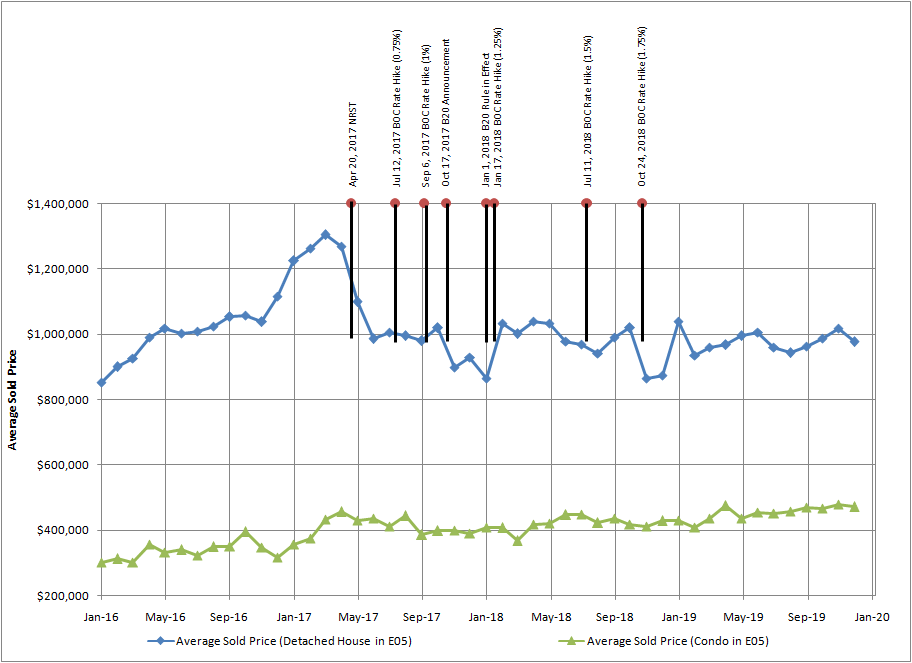 When comparing the 2018 and 2019 data for E05 neighbourhood, it does paint a clear picture that the detached housing market is becoming more seller friendly. The average days on market became shorter and the average price increased, especially for smaller properties (e.g. bungalows) with price tag of less than 1 million.

The condo in E05 is still a hot commodity. The average price increased 8% compare to last year and days on market were also shorter. One interesting fact to note is that the average price for condo increased a whopping 35% between 2016 and 2019, where the detached home average price was more less the same (-3%). I anticipate that in near future, the increase in condo price will help second time home buyer currently owning a condo to cash out their condo and upsizing to a larger freehold home, which will increase the demand for detached home and potentially price. Table 3 below provide an overview of the yearly data for the E05 neighbourhood.

The limited inventory was likely the driving factor for the increase in price. The average sale price to listing price ratio for detached home again maintained over 100% for December 2019, indicating most of the detached homes in the area were sold over asking (Figure 4). 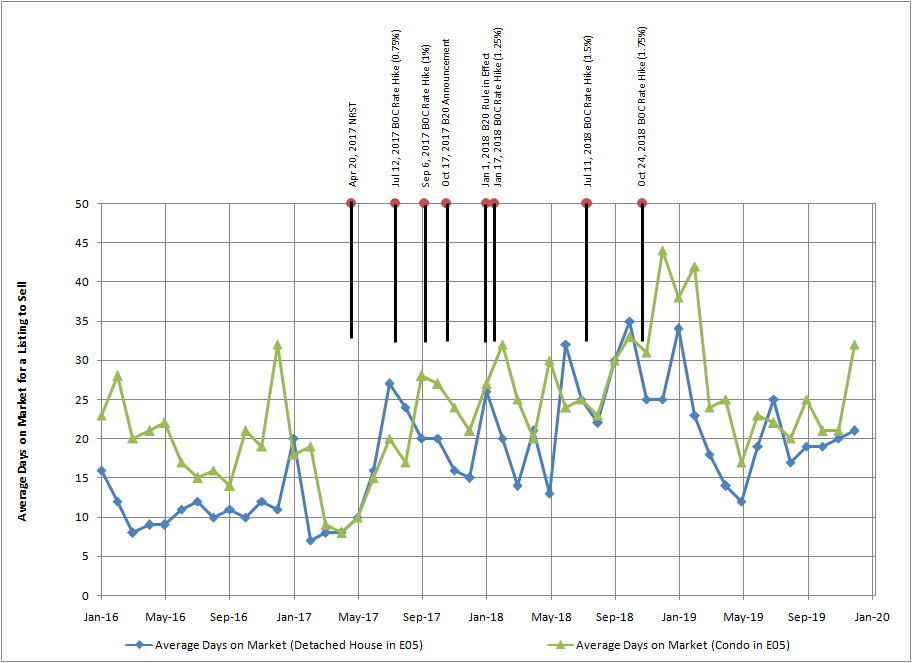 Figure 2: Average Days on Market for Detached Home and Condo in the Scarborough E05 Neighbourhood 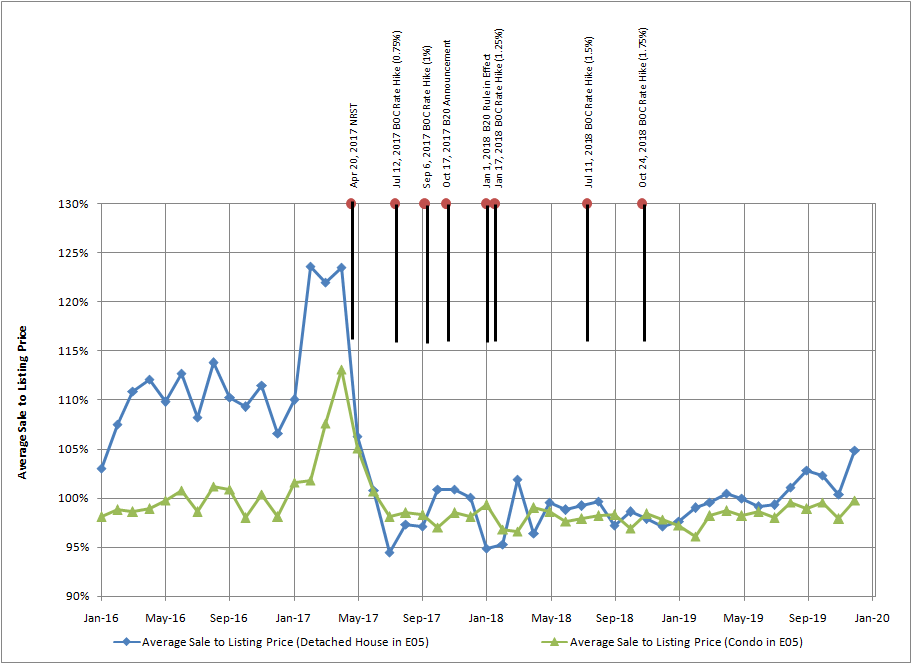 The Bigger Picture (Market Watch by Toronto Real Estate Board)

Toronto Real Estate Board President Michael Collins reported that December 2019 residential sales reported through TREB's MLS® System by Greater Toronto Area REALTORS® were up by 17.4 per cent year-over-year to 4,399. Total sales for calendar year 2019 amounted to 87,825 – up by 12.6 per cent compared to the decade low 78,015 sales reported in 2018. On an annual basis, 2019 sales were in line with the median annual sales result for the past decade.

"We certainly saw a recovery in sales activity in 2019, particularly in the second half of the year. As anticipated, many home buyers who were initially on the sidelines moved back into the market place starting in the spring. Buyer confidence was buoyed by a strong regional economy and declining contract mortgage rates over the course of the year," said Mr. Collins.

While sales were up in 2019, the number of new listings entered into TREB's MLS® System was down by 2.4 per cent year-over-year. For the past decade, annual new listings have been largely in a holding pattern between 150,000 and 160,000, despite the upward trend in home prices over the same period.

"Over the last ten years, TREB has been drawing attention to the housing supply issue in the GTA. Increasingly, policy makers, research groups of varying scope and other interested parties have acknowledged that the lack of a diverse supply of ownership and rental housing continues to hamper housing affordability in the GTA. Taking 2019 as an example, we experienced a strong sales increase up against a decline in supply. Tighter market conditions translated into accelerating price growth. Expect further acceleration in 2020 if there is no relief on the supply front," said Jason Mercer, TREB's Chief Market Analyst.

Meet Joe Xu, the Right Realtor for You.

I’m a perfectionist — I obtained my Civil and Environmental Engineering Degree from the University of Waterloo with the highest GPA in my class. While practicing engineering, I worked with numerous developers on residential development projects. I became passionate about real estate, having invested personally since 2011.

In 2016, I transitioned my love for real estate and helping others into a full-time real estate career. I won the following awards with my service-first mindset

I believe my clients deserve the highest level of excellence in service. To make you more comfortable and confident in your real estate decisions, I always treat you with honesty and professionalism.

I am working with a supportive team of professional realtors. Our mission is simple, we are here to ensure your real estate transaction is smooth and stress free!

For sellers, we sell homes fast for TOP $! Why listing with us?

For buyers, we will guide you through the process of making your biggest investment and help you get a place that you love! Why buy with us?

This website is operated by a brokerage or salesperson who is a member of The Canadian Real Estate Association.

The listing content on this website is protected by copyright and other laws, and is intended solely for the private, non-commercial use by individuals. Any other reproduction, distribution or use of the content, in whole or in part, is specifically forbidden. The prohibited uses include commercial use, "screen scraping", "database scraping", and any other activity intended to collect, store, reorganize or manipulate data on the pages produced by or displayed on this website.